Translating the Book of Mormon 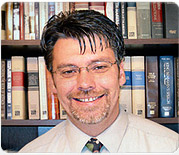 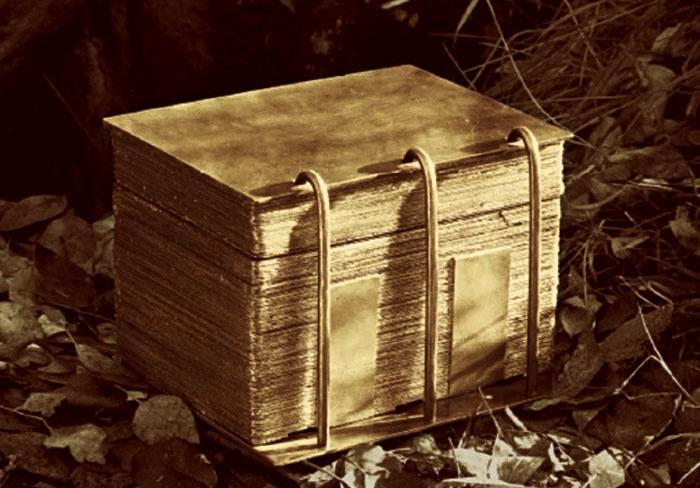 How did Joseph Smith translate the Book of Mormon? Joseph didn’t share many details of the translation process other than the fact that he received the translation by the gift and power of God. In order to develop any theories on how it was done we must to turn to clues from those who witnessed the events. When we examine those details we quickly discover that the translation process may not have been like what many members have envisioned.

As I began to write this article (based on my promise in the last installment) a friend of mine coincidentally published a detailed discussion of this topic in the new Interpreter on-line journal so I’ll provide a link at the end of this article for those who want more depth on this fascinating subject.

The average member’s mental image of Joseph translating the plates is generally formed from artwork in Church magazines and comments from Sunday school teachers rather than from a critical examination of the historical evidence.

Unfortunately most artists are not historians and may produce beautiful drawings and paintings that are based on misassumptions. Some wonderful LDS artwork, for example, depicts Caucasian-looking Nephites with romance-novel cover-model physiques wielding broadswords and Viking-like helmets—none of which fits the actual images that could be created for how early American warriors would have looked or the weapons they would have utilized.

The average painting of the Savior typically falls victim to similar problems with features generally based on the cultural or theological perspectives of the artist rather than on historical accuracy.[i] Da Vinci’s “Last Supper,” for example, depicts European-looking men sitting at a regular table instead of Middle Eastern men reclining at the low tables of Jesus’ day. An Italian Renaissance portrait of Mary and the baby Jesus has a Renaissance castle and town in the background, and the 1569 “Census of Bethlehem” by a Belgian artist depicts snow and ice-skaters in what appears to be a Renaissance Belgium village.[ii]

Some Church art of the Book of Mormon translation shows Joseph studiously looking at the plates with one finger on the engraved letters as if he could actually read what each character said. Some show Joseph reading the characters to his scribe Oliver Cowdery with the plates exposed in full view of them both. Other images show Joseph dictating to a scribe sitting on the opposite side of a curtain. A few images show Joseph looking at the plates through the Nephite Interpreters. All of these images are incorrect.

First, while a curtain may have been used between Joseph and Martin Harris (the first Book of Mormon scribe) the majority of the text was translated in the open while the plates were covered with a cloth. The plates were never in open view and were only exposed to others as instructed by the Lord when they were shown to witnesses. A curtain or blanket appears to have been draped across the entry to the living room at the Whitmer house (where much of the translation took place) in order to give Joseph and his scribe privacy from curious on-lookers while they worked.[iii] This curtain was apparently not present all of the time, however, because other Whitmer family members were witnesses to the translation process.

While some LDS artwork doesn’t depict any translating tools, most informed members are aware of the Nephite “Interpreters” that Moroni put in the stone box with the plates so Joseph would have a tool for translating. According to those who handled the Interpreters they were like large spectacles with stones or crystals in place of lenses.

Many of the details on the Book of Mormon translation method become lost or muddied over time. Part of this confusion was the result of the fact that some early Latter-day Saints began referring to the Interpreters as the “Urim and Thummim”—a reference to a device in the Old Testament that was associated with the High Priest’s breastplate and used for divination or for receiving answers from God (see Exodus 28:30).The early Saints didn’t think that the Nephite Interpreters were the Urim and Thummim mentioned in the Bible but were another Urim and Thummim given for translating the plates.

Unfortunately the Interpreters didn’t come with instructions and Joseph was apparently left on his own as to how to use them. This is when his cultural background came in handy.

It’s important first to return to D&C 1:24 which tells us that God speaks to His children (including the prophets) in “in their weakness, after the manner of their language, that they might come to understanding.” Our “language” includes more than words, but also how we understand the world around us. My “language” is different than the language of Joseph Smith, or Moses, or Gandhi. In Abraham’s day it was believed that the disc-shaped earth was covered with an inverted heavenly bowl that contained a heavenly ocean. Windows would open periodically to let out the rains.

In Joseph Smith’s day many of the frontiersmen in his vicinity believed that divining rods and seer stones could be used to find water, lost objects, and treasures. The ability to divine was generally considered to be a God-given gift and was practiced by devoutly religious men and women.

Long prior to acquiring the plates the young Joseph Smith was a believer in divination. In fact, he and his friends and family believed that he had the God-given gift to find lost objects by way of a seer stone. Seer stones were thought to be special stones in which one could see the location of the object for which one was divining. The seer stones were related to crystal balls or the practice of looking into pools of water or mirrors to divine information (such as the Queen’s magic mirror in the Snow White tale).

While this seems strange in modern times, in Joseph’s day many intelligent, educated, and religious people believed that such real powers existed in the forces of nature. Well into the nineteenth-century, for instance, a number of people believed in alchemy—the belief that baser metals could be turned into gold. Some of New England’s practicing alchemists were graduates from Yale and Harvard and one alchemist was the Chief Justice of Massachusetts.[iv]

In order to see inside of the stone, it was sometimes placed between one’s eye and the flicker of a candle, or into something dark—such as an upside down hat—to shield out all light. It was believed that in such an environment a seer (someone who “sees”) could stare into the stone for the information one was seeking.

When Joseph first acquired the Nephite Interpreters he also tried placing them into a hat to shield the light. Although he apparently managed to translate the 116 lost pages by this method he complained that he had a hard time fitting the spectacles into the hat and that the two lenses were set too far apart—and were apparently made for someone with a broader face. It gave him eyestrain when he stared into the lenses.

The seer stone made the translating process much easier and we read that Joseph would sit for hours, his face in the hat—to obscure the light—while he saw the English translation of the Book of Mormon text that he dictated to his scribes.

While such an image may shock modern members, we have to remember that the Lord works through the culture of His children and speaks to them in language (words, symbols, and methods) through which they can understand. If one can accept that Nephite Interpreters could be used to translate an ancient document, is it really a wonder that God might have prepared Joseph with the cultural belief in seer stones so that he would be receptive to the workings of the Interpreters or that he believed that his seer stone was a Urim and Thummin like the Interpreters.

In reality the major difference between the average-member-view of the Book of Mormon translation (Joseph looked into the crystals in the Interpreters) vs the historical view (Joseph looked into a seer stone in a hat) is the “hat”—one is a stone or crystal out of the hat; the other is in a hat.

Joseph, of course, was not alone in believing in unscientific things in a world that didn’t have today’s advantages of scientific knowledge. The Bible records several instances or forms of divining as practiced by the righteous followers of God. We read that Aaron had a magical rod (Exodus 7:9–12). Jacob also used magical rods to cause Laban’s cattle to produce spotted and speckled offspring (see Genesis 30:37–39). In Numbers 5 we read about a magical test for adultery in which the priest would give the suspect a potion to drink. If the woman was guilty, her thigh would swell (v. 11–13, 21). The Old Testament records that the Joseph had a silver cup by which “he divineth” (Genesis 44:2, 5). This convention, known as hydromancy, was also practiced by the surrounding pagans. The casting of lots (sortilege) to choose a new Apostle (see Acts 1:26) was known and practiced by the pagans of Jesus’ day. Even some of Christ’s miracles were similar to the magic of surrounding pagans. Jesus’ healing of the deaf man by putting his fingers in his ears (Mark 7:33–35) and Jesus’ healing of the blind man by touching his eyes with spittle and clay were also common pagan practices.

Although the historical picture of the Book of Mormon translation process is not as commonly known to some members as it perhaps should be, despite the cries of critics the Church hasn’t been hiding this information. It has been mentioned for instance in the Ensign,[v] (one instance in which the talk was originally given to Mission Presidents[vi]), the Friend,[vii] as well as other LDS-targeted publications.

As we continue our discussion of scriptures and translation in subsequent installments it’s important to note that from the historical record we also learn that Joseph translated in plain sight of other witnesses and that, because his face was buried in a hat to exclude light, it would have been impossible for him to be reading the text of another document while he dictated the translation.

For those who would like to read a much more detailed paper on this topic I recommend Roger Nicholson’s new Interpreter article, “The Spectacles, the Stone, the Hat, and the Book: A Twenty-first Century Believer’s View of the Book of Mormon Translation” as well as Brant Gardner’s award winning book The Gift and Power: Translating the Book of Mormon.

[v] Richard Lloyd Anderson, “By the Gift and Power of God,” Ensign (September 1977), 80; Gerrit Dirkmaat, “Great and Marvelous are the Revelations of God,” Ensign (January 2013), 46 (while Dirkmaat doesn’t mention the hat, he does explain that Joseph sometimes used a seer stone [also referred to as a Urim and Thummim] to receive revelation.)

[vi] Russell M. Nelson, “A Treasured Testament,” Ensign (July 1993). (Like Anderson [above] Nelson does mention both the seer stone and hat).

[vii] “A Peaceful Heart,” Friend (September 1974). (This article doesn’t mention the hat but does mention the “egg-shaped, brown rock… called a seer stone.”)

The Spectacles, the Stone, the Hat, and the Book…