Deep Symbols in the Book of Mormon 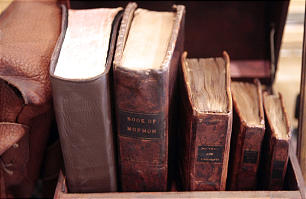 By Michael De Groote
Mormon Times
Monday, Mar. 02, 2009
PROVO, Utah — Layers of symbolism are under the surface of the Book of Mormon according to Joseph Ostenson, a doctoral candidate in theoretical and philosophical psychology at Brigham Young University. These symbols build on each other like layers of translucent paint — each adding a color while changing the color underneath to create a masterpiece describing the mercy of God.

Ostenson described his typological approach to the Book of Mormon at the eleventh annual Religious Education Student Symposium on Feb. 27 at BYU. For Ostenson, the Book of Mormon is a expression of Christ’s doctrine summarized in Doctrine and Covenants 10:67 as repenting and coming unto Christ and in 1 Nephi 1:20 as Christ’s tender mercies.

Each time period in the Book of Mormon has an overriding symbol or typology. As time progresses in the record, the symbols or types change and will not only look forward, but backward. The backward looking aspects of these symbols are called antitypes. The forward-looking symbols or types anticipate and point to a larger overriding type called an archetype.

Ostenson said this approach is often used in Biblical studies and applies to the Book of Mormon as well.

The best way to understand what Ostenson means is to look at the types and antitypes he ascribes to the Book of Mormon.

1 Nephi through Omni — Scattering and gathering

The type in the begininnig of the Book of Mormon is “scattering and gathering.” This theme is throughout the Bible also. “Israel is scattered and one day it will be gathered again,” Ostenson said. “There are always these scatterings and gatherings throughout Old Testament history.”

In the Book of Mormon we see Lehi and his family “scattered” away from Jerusalem. Later we see Nephi’s people scattered as they leave Laman’s followers in the land of their first inheritance. Ostenson was particularly impressed with Jacob’s allegory of the olive trees as an expression of scattering and gathering.

Here Osterson sees the theme of “bondage and redemption” as an antitype building on the previous type of scattering and gathering. “The bondage would occur with the scattering,” he said.

In the book of Mosiah, King Benjamin tells his people that they can be made free through Christ — a spiritual redemption. There are also two stories of bondage. One is the account of Alma the elder’s people bondage and escape and the other is the almost parallel account of Limhi’s people’s escape.

“Bondage and redemption” gives clarification to “scattering and gathering.”

After we have been redeemed, Ostenson said we want to share that message. The type of “missionary work” acts as an antitype building on the previous types. The symbolic overlays fit together neatly. Ammon’s missionary work that leads to the conversion/redemption of the Lamanites in turn leads to their gathering with the Nephites.

Because of the progressing types overlaying each other, the war chapters of Alma take on a new meaning. “We can see missionary work (the previous type) as a sort of war,” Ostenson said. There are those who try to gather and those who try to scatter. The threats are external

As the narrative progresses, the war symbol becomes subtler with the rise of secret combinations.The battle between good and evil shifts to the internal struggles. The invading Lamanites were one threat, but the enemy within Nephite society is a greater threat.

“In these chapters  . . . there is this illusion of gathering,” Ostenson said. “But what is really going on is there is this struggle between the arm of flesh and trusting in God.”

Ostenson believes that “all the stories in the scriptures are pointing us to this one moment.”

The final books in the Book of Mormon are all the symbols in reverse. They types are the antithesis of what brought people to Christ. Mormon’s lament over his “fair ones” shows a people who have been scattered, brought into bondage and died while trusting in the arm of flesh.

For Ostenson, when Moroni encourages people to ponder the mercies of God, he wants people to see God’s mercies in their own lives and to see how the types in The Book of Mormon brought the faithful to the great type, the archetype to whom all things are typifying.

Book of Mormon – For Our Day

In the Mouth of Two or Three Witnesses